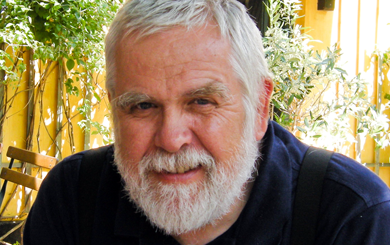 An extraordinary democratic example of solving a crises

Iceland was in 2009 in an economic and political crisis comparable to the Greek crisis today. Perhaps this true story might give them ideas on how they could discuss resolving their crisis.

Lárus Ymir Óskarsson, born 1 March 1949 in Reykjavik, Iceland, is an Icelandic film and television director who is best known in Sweden for the Longing blue flower in 1998 with famous Swedish actor such as Eva Röse and Marika Lagercrantz, also the feature film The Frozen Leopard 1986 staring among other Peter Stormare and Joakim Thåström.

Around 2000 Lárus moved back to Iceland where he came to commit to rebuilding the Icelandic society after the severe economic crisis.

– We were a group who started dating after the crisis. We did not like what we saw in Iceland – the situation was by no means sustainable, many were angry and paranoid, they tore it down and did not build up.

It was early spring 2009 and we had similar ideas about what´s now needed to be done.

We were 9 people who met, including the Minister of Environment. Our idea was that we would implement a national unity “Thodfundurinn” and we chose the name anthill / Maurathufa for our little club. It was for us to bring out the people’s wisdom. You can compare it to an anthill in the woods, near a river. The edges around the river eroded and the river gets closer to the ant hill that starts moving from the threatening river. There is no general in charge of the work. None of the ants have a clue. But the anthill know – and in its action. There is a wisdom in the anthill so that all together united in a common direction.

Thodfundurinn (The National Assembly / National Coalition) wanted to gather a statistical sample of all the people, places of residence, age, sex professionals, entrepreneurs, government people, the country’s leaders, convened a meeting in a gymnasium. The meeting took place without formal leadership, without governance agenda. All sitting at the round table and a system made sure that everyone’s comments were heard. Thodfundurinn was enormously popular and appreciated at all levels of society. Many similar large and small meetings were held elsewhere.

A year later a similar meeting as the first took place, now with over a thousand participants and now the parliament (Altinget) was host. Icelanders have long and repeatedly sought to bring about a new constitution. All attempts had foundered on the political parties could never co. Now one would try to complete the task in accordance with a broad-based democratic principle. The first step was a new national assembly, as three of the “ants” in design.

Again, it was built on a sample of the Icelandic people. Henceforth the people elected a 25-man group of people from different parts of society, people with all kinds of political colors of the reddest to the bluest.

The 25 decided to operate openly. Their communication could be seen “live” online. All drafts put out for public discussion before they were written on the final proposal. Thousands of people sat at home, commented and expressed opinion. It debouching into a concrete proposal for a new constitution, which all 25 members unanimously backed.

– “Their way of working demonstrates that we can lift ourselves from the bickering and rooster fencing when we put the other before ourselves. And do not think most of the re-election. When society and man is more important than your own position so you can do good to all. ”

The world is perfect as it is, it can not be otherwise, everything is as it should. – But every morning we have up, each and toil like a beast to make it better.